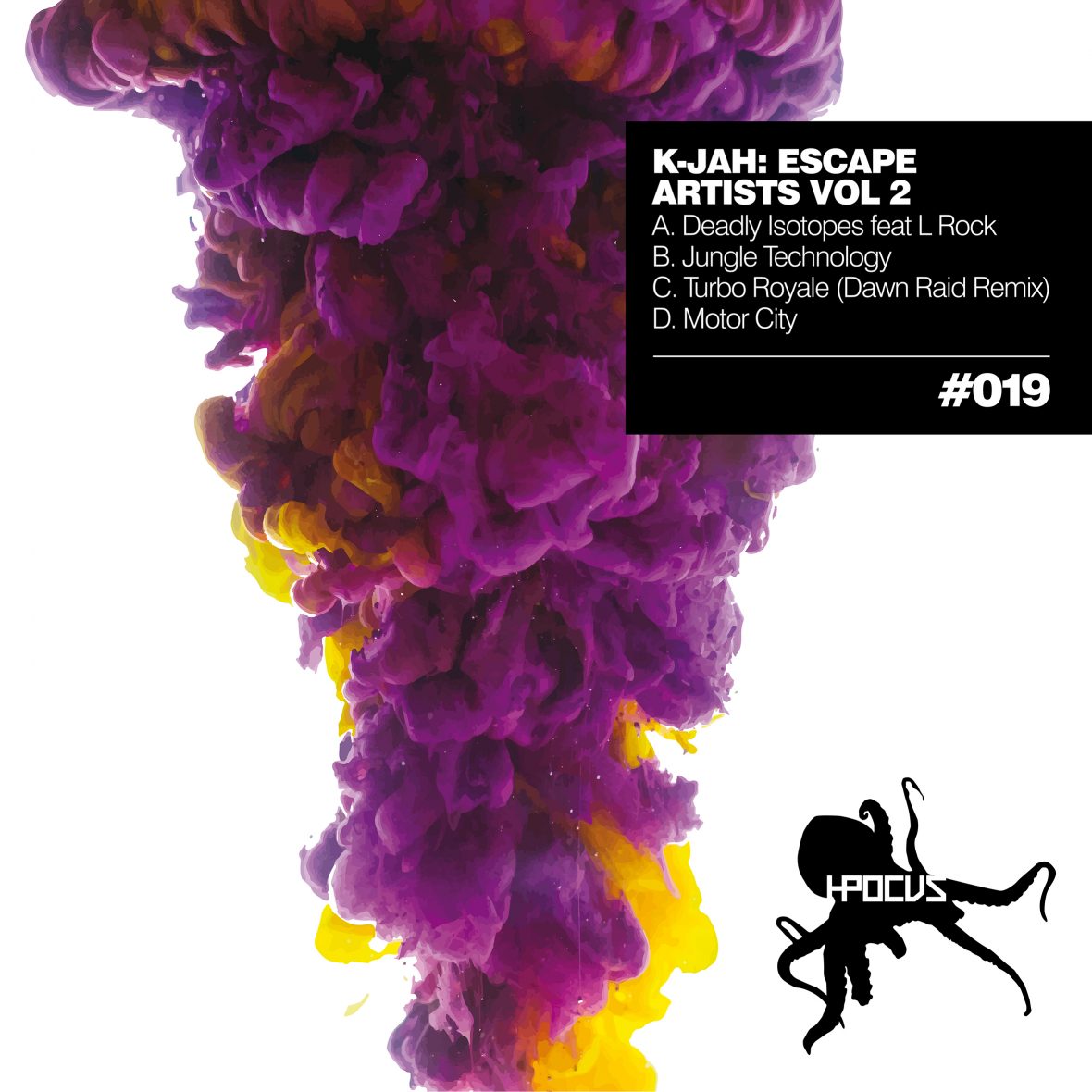 Hocus Pocus are proud to present the second EP in the Escape Artists series… with the focus this time falling on Birmingham dnb producer extraordinaire… K-Jah!

This EP series is about bringing something for everyone to the table and showcasing the rising producers & DJ’s in Jungle/Drum and Bass. No matter what your Drum and Bass/Jungle preference, you are sure to find a tune on the EP that will tick the boxes!

A – Deadly Isotopes: feat. L Rock
‘Deadly Isotopes’ is a real menacing attack on the senses. Building with a sinister soundscape & vox you will be hypnotised by the skippy dark nature of the intro as it breaks down in to the science-fiction type vox that sucks you into the impending drop! Then out of nowhere deep rolling bass drags you full throttle into the track! Deep subs then combine with throbbing rolling bass to keep your senses engaged whilst the track rolls out in true jungle fashion. Most definitely a riddim to let the listeners know what time it is! Big!

B – Jungle Technology
If ‘Deadly Isotopes’ can be described as a ‘menacing attack’…then ‘Jungle Technology’ is more of a straight up uncompromising steppa that steps out in a big way! Building in a very unassuming way ‘Jungle Technology’ injects pure dnb tech vibes into the riddim as the intro pulsates along. Further to this, a building fanfare synth stab hooks you in & doesn’t let go before the tune breaks down to the drop! At that point you are transported via a disgustingly heavy & menacing flourish of bass which complements the heavy hard beats like an audio marriage made in heaven, stepping out in true dnb thoroughbred fashion! A real dance floor steppa in the truest sense of the word. Nasty!

C – Turbo Royale: Dawn Raid Remix
K-Jah & Dawn Raid go back to the golden era of the mid 90’s with this cut. A rolling scatty intro incorporating classic breaks builds up, in combo with & guided by well-placed militant clash vocals! The drop hits you with a classic and infectious jump up Jungle bassline that sends the track into meltdown and has already devastated dance floors on dubplate rotation! The track has lots of intricate switches in the bassline & beats to keep you bubbling till the very end. Class!

D – Motor City
Showing mad love for the early rave scene of the 90’s as Jungle Techno & that classic Detroit sound… K JAH brings forth lush stabs and deep filtered “mind, body, soul” voxes reminiscent of the early 90’s on the intro! Motor City then breaks into classic steppa drums and sub bass along with the hooky stabs which keep you bouncing after an intro that is set to take you into the clouds! The track progresses nicely, rolling throughout…making it a great track to mix within a set. If you love your deeper and more euphoric rolling dnb vibes, then this one for you!