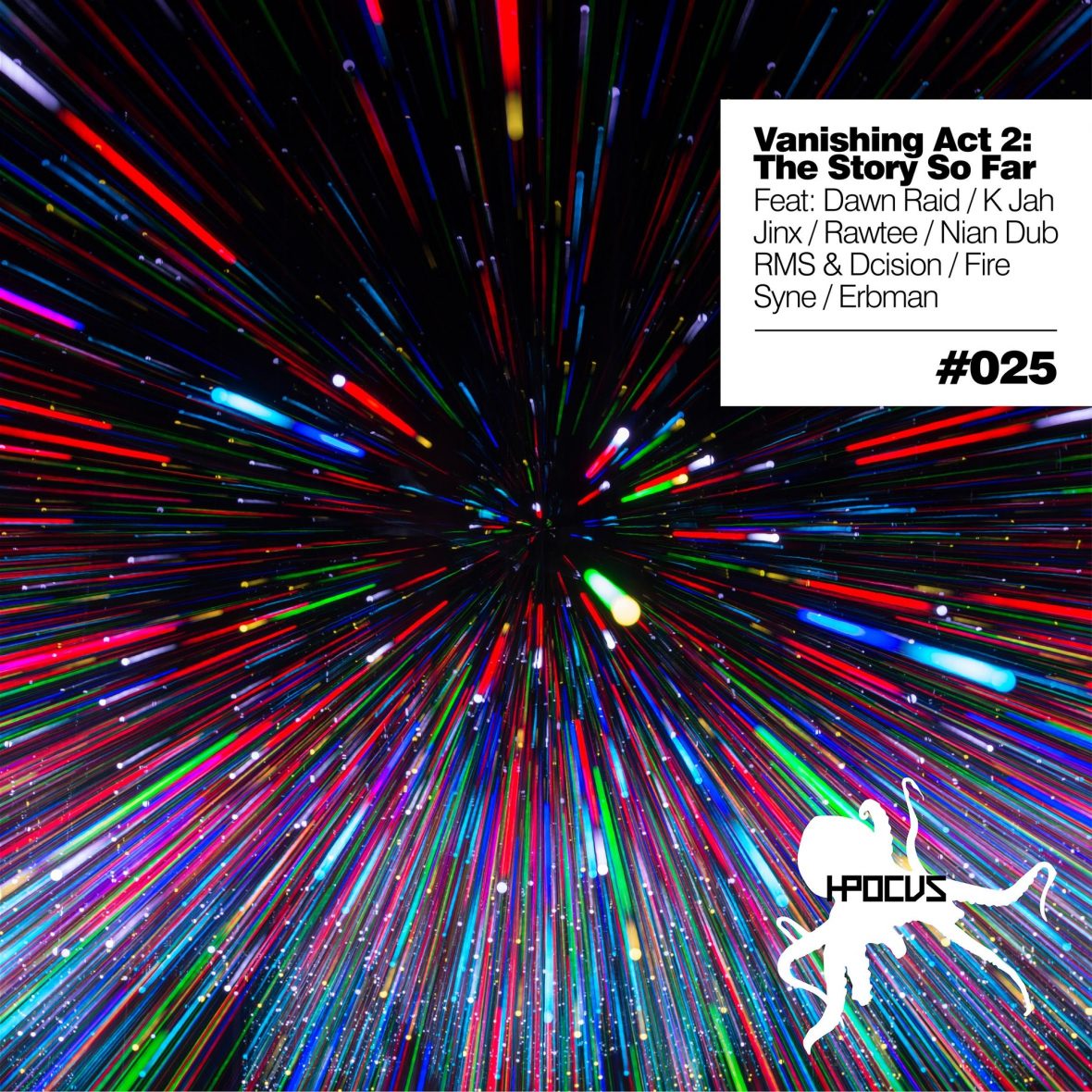 Fresh from making some serious waves across the scene via the storming Masters of Illusion EP feat Margaman, Kumarachi, Dawn Raid, & Next Chapter…

Hocus Pocus is now proud to present their 25th release! Release 25 is a label showcase of Drum & Bass/Jungle bangers, which Dawn Raid & the full roster of Hocus Pocus artists have dropped since Vanishing Act Part one – with the bonus of a few banging V.I.P’s to boot!

1. Dawn Raid: Amnesia
Amnesia’ is more an elevating jungle track that gives a heavy nod to the amnesia house second summer of love raving heyday of the late 1980’s. Building in a very unassuming way ‘Amnesia’ injects a pure uplifting vibe to the riddim as the intro skips along! Deep soundscape like pads build the anticipation for the drop! Upon the drop, quality Dawn Raid production from a classic bygone Balearic era take the track naturally where it needs to go! Into the jungle with absolutely no compromise. Bad!

2. K Jah: Jungle Technology
‘Jungle Technology’ is a straight up uncompromising steppa that steps out in a big way! Building in a very unassuming way ‘Jungle Technology’ injects pure dnb tech vibes into the riddim as the intro pulsates along. Further to this, a building fanfare synth stab hooks you in & doesn’t let go before the tune breaks down to the drop! At that point you are transported via a disgustingly heavy & menacing flourish of bass which complements the heavy hard beats like an audio marriage made in heaven, stepping out in true dnb thoroughbred fashion! A real dance floor steppa in the truest sense of the word. Nasty!

3. Dawn Raid: Poor Live Trife
This track is one for those who like it rough & rolling! The scene is set by a recurring rocking beat that builds nicely alongside a little vocal stab straight out of that golden-age hip hop era. This is accompanied by a flourish of keys that complement the beats as the pressure builds! A filthy bassline workout then takes no prisoners as the beats roll out hard to the tracks conclusion, with a cheeky twist;) Straight tough & uncompromising. Bad!

4. RMS & Dcision: Voodoo Magic Man
Serious, serious tune this! Reminiscent of that pure dark jungle/dnb sound that hit hard in late 90’s… RMS & Dcision put a 2017 stamp all over this riddim’ to make it one those tracks that will do damage on any dancefloor. The eerie intro on this one step’s out as it draws on the senses! Further to that… the track then introduces a hypnotic vox sample that has that dark creeping up on ya vibe all over it! At the breakdown, the beats & bass catapult you in to an intoxicating track that will steps out with precision till the tracks conclusion. Hard!

5. Fire Syne: Equinox
Computerised percussion and deep textures introduce the beats leading us into a roller of clinical proportions! Cybernetic stabbing bass keeps this track rolling as deep chords pulse in and out throughout the track, a clever blend of organic and synthetic as if it was a cyborg in musical form, Heavy!

6. Jinx: Replay
House style vibes, hip hop vocals and rolling beats start this track off correct building up to the drop. Absolute devastation ensues in the form of big, classic distorted bass stabs and crunchy, hard rolling beats throughout, which will send any dance floor into complete fever pitch! A true banger that finishes off the EP leaving you wanting more!

7. Deadly Isotopes: feat. L Rock
‘Deadly Isotopes’ is a real menacing attack on the senses. Building with a sinister soundscape & vox you will be hypnotised by the skippy dark nature of the intro as it breaks down in to the science-fiction type vox that sucks you into the impending drop! Then out of nowhere deep rolling bass drags you full throttle into the track! Deep subs then combine with throbbing rolling bass to keep your senses engaged whilst the track rolls out in true jungle fashion. Most definitely a riddim to let the listeners know what time it is!

8. Dawn Raid – Come Get Yours (Nian Dub Remix)
Nian Dub have taken one of Dawn Raid’s seminal tracks ‘Come Get Yours’ and given it their ‘future Jungle’ touch! Maintaining the moody tech vibe of the original. The guys have re-worked it into a more tech infused abstract piece, combining the mysticism of Dub with the metallic sharpness of Techno, the result is a full on, bass powered, tribal workout that just keeps pulverising you into dance floor submission! Unique business.

9. Erbman: Long Rizla Blues
Erbman goes back to the golden era of the mid 90’s award-winning Bristol sound with this cut! A rolling intro breaks down into a build up guided by well-placed hip hop style vocals! The drop hits you with a classic and infectious jump up double bass bass that sends the place into meltdown and has already devastated dancefloors on dubplate. The track has lots of intricate switches in the bassline to keep the ravers bubbling. Vibes!

10. Dawn Raid: One Brick
Dawn Raid come correct for those who like that authentic rinse out with this big amen track! Not for the faint hearted! This track kicks off with a gritty but affecting, Motown style sample which sets the tone nicely for what’s about to ensue. Upon the drop, Dawn Raid up the temperature to dancefloor destruction level with classic full throttle basslines which complement the unyielding drum work… rolling out with ferocious intent! Definitely one to get the party started.