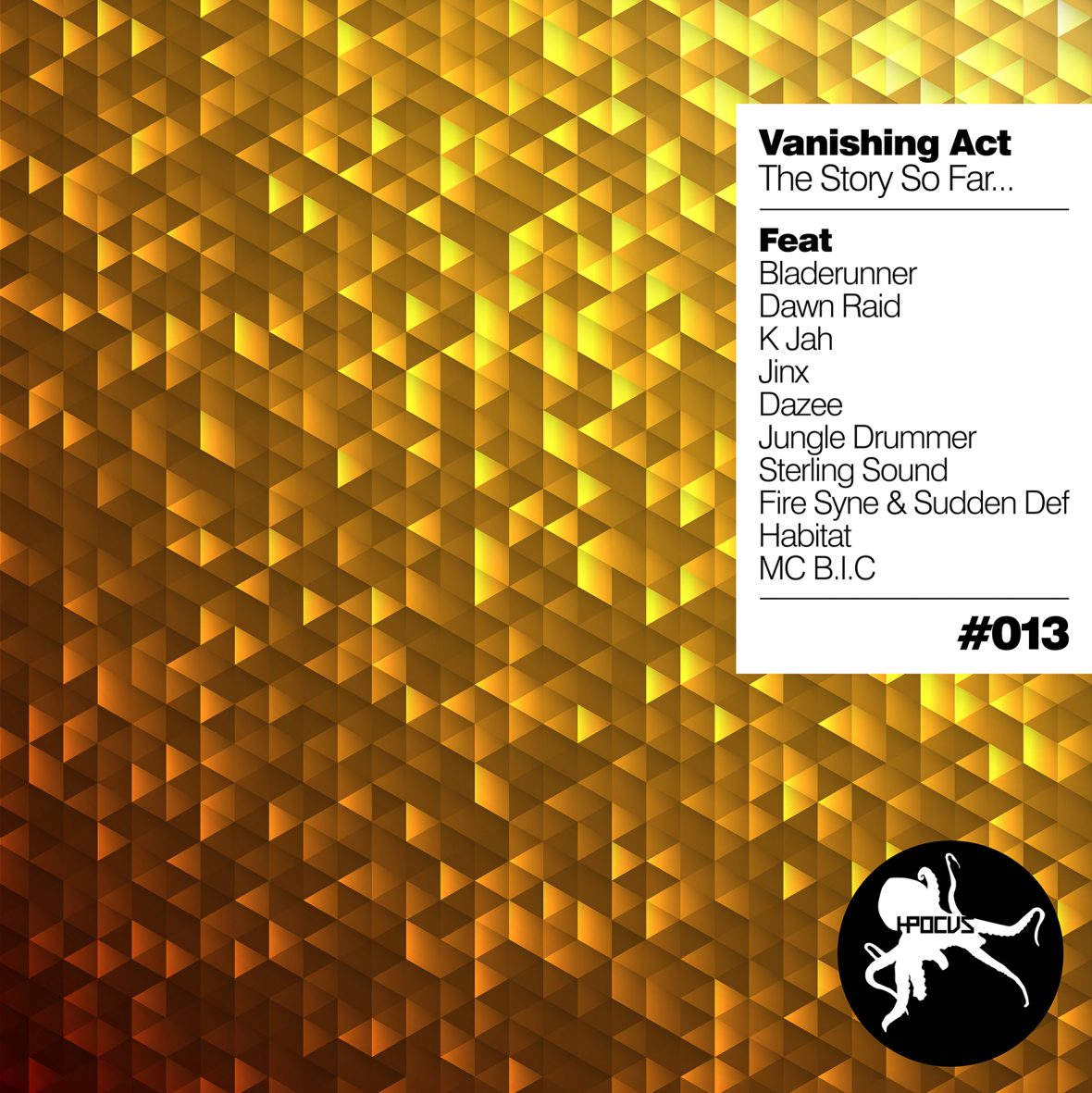 Hocus Pocus is proud to present their lucky for some 13th release! Release 13 is a label showcase of Drum & Bass/Jungle bangers, which Dawn Raid & the full roster of Hocus Pocus artists have dropped on the labels two-year journey so far:

1. Dawn Raid: Pushed Out The Light
Dawn Raid lay the smackdown with this big amen tear out track! Not for the faint hearted! This track kicks off with searing cut-throat stabs, eerie trippy vox’s & swirling dark atmospheric pads that set the mood nicely for what’s about to ensue. Upon the drop, Dawn Raid up the temperature to dancefloor destruction level with classic 808 distorted basslines which complement the unyielding drum work… rolling out with ferocious intent! Definitely one to get the party started.

2. Sterling Sound: Back to the Real
Cardiff based collective Sterling Sound drop this sweet Jungle cut on us. Deep pads and vocals bring the vibe correct before rolling out into hype vocals, traditional breaks and bass that just leave you feeling like you’re in the midst of the Amazon doing a war dance! An absolute must have, that covers all that is timeless about true jungle music!

3. K Jah: Turbo Royale
K JAH goes back to the golden era of the mid 90’s with this cut. A rolling intro breaks down into a build up guided by well-placed militant clash vocals! The drop hits you with a classic and infectious jump up Jungle bassline that sends the place into meltdown and has already devastated dancefloors on dubplate. The track has lots of intricate switches in the bassline to keep the ravers bubbling.

4. Bladerunner & Dawn Raid: Iscariot
Dawn Raid teams up with one of the biggest current stars in the scene at the moment…the mighty Bladerunner. This collaboration has resulted in a tune that gives a strong nod to the Bristol sound of the mid 90’s. Inspired crisp live scatty beats and Kung Fu vocals lead us into an all out assault of face-melting, devastating and bouncy basslines with sinister dub fx stabs and vocals. This one really does do the business, as you would expect from such a potent artist collaboration.

5. Jinx: Musical Talking feat. K Jah
Musical Talking is a creeping roller that you wont be able to get enough of after the first time you give it a listen. Building in a very unassuming way ‘Musical Talking’ injects pure dub vibes into the riddim as the intro pulsates along. Further to this, a knocking bass sound hooks you in & doesn’t let go, before the tunes breaks down to the drop! At this point you are transported via a disgustingly deep & menacing reece bass which complements the knocking bass like an audio marriage made in heaven to roll out like a real champion bubbler. RRRRRRRRRolling to say the absolute very least. A real dance floor roller in the truest sense of the word. Sick!

6. Fire Syne & Sudden Def: Send Em Out
Ouch!!…Organic chopped and rolling drums collide with sharp synthetic bass and synths, glued together finely with splashes of dub to create this monster Jungle Tech roller! The Detroit inspired synth intro gives the track the 90’s rave touch before making way to punching, skatty, rollout beats with a collage of deep glitch bass! Dub inspired vocals and sounds compliment this combination throughout to result in a piece of finery Soundwave would happily have in his music arsenal! Bad!

7. Dawn Raid: Old Painless
“She says the Jungle!!” from the drop of the needle on the record, or to the play button being pressed on a CDJ… this track lets you know what’s up from the very first second! The classic vox which ushers the track in sets the tone, as this one laden with samples from a classic action jungle flick builds with ferocious intent. An eerie pad & string then accompany the beats & vox as the dynamic of the track begins to increase & lead towards the crescendo! Upon the drop… an absolutely cantankerous bass cannon is let off transporting any listener in to the heart of the Amazon… skanking like as if their very life depended on it. A true jungle rinser! ‘Old Painless’ is most definitely one for any DJ to “pull out tha bag” 😉

8. Dawn Raid meets the Jungle Drummer: The Boogie Man
Dawn Raid & The Jungle Drummer pull no punches with this piece of jazz fused audio mastery. “The Boogie Man” intros like something akin to musical legend’s Charlie Parker, Buddy Rich, Ron Carter & Wes Montgomery jammin’ at a smoke-filled Ronnie Scott’s on a warm summer’s night! Complemented by a compeer of carefully arranged vocals that ask the listener to “Boogie on down…don’t stop!” the listener is transported to a place where the undoubted instrumentalist skills of Jungle Drummer, & the purist production merits of Dawn Raid fuse effortlessly to produce a piece of dnb pressure that melts into a drum & double bass workout that will sit well in any dj’s set… big tune!

9. K Jah: Hot Town
Serious, serious tune this! Reminiscent of that pure pioneering Bristol sound from the late 90’s… K Jah puts a 2014 stamp all over this riddim’ to make it one those tracks that will do damage on any dancefloor. The eerie intro on this one step’s out as it draws on the senses & snaps your neck along to the beat! Further to that… the track then introduces a trippy melody that sounds like something ghostly is creeping up on ya! At the breakdown hip-hop vox catapult you in to a bouncy bubblin’ b-line that hooks you in & doesn’t let go till the track fades away! A really intoxicating track that will have you bubblin’ to say the very least.

10. Habitat: It’s Behind You
Habitat intro’s his Hocus Pocus tenure with this piece of audio dynamite. “Its Behind You”
Begins like something akin to a suspense filled psychological horror flick! A recurring heavy stepping sets the scene beat, which builds nicely for a true dnb DJ’s mixing pleasure. The impending doom then builds to set the tone for the drop! Upon the drop an atomic filthy bassline workout takes no prisoners as the beats start to hard-step out & snap necks for anybody in the vicinity… very ill!

11. Dawn Raid: Just 4 Once
Another badass dancefloor track that will be a potent weapon in any DJ’s track list arsenal. ‘Just 4 Once’ buys in to what are now becoming Dawn Raid’s trademark elements… by building a very soulful audio landscape laden with pads & strings as the intro sets the foundation for the track. This is complemented very nicely by some heartfelt vocal acrobatics, & an electric piano flourish that entice the listener into the all-important groove. As the track builds, the listener is transported to the drop via a filtered drum track & musical line that slams in with utter devastation! 808 distorted basslines etc, etc then commence do their job to great effect! Another victory?? Yes indeed, big!

12. Jinx & DJ Dazee: Make Some Noise
‘Make Some Noise’ is a real no holds barred track that combines all of the elements you would expect Jinx to call upon when laying the smackdown for Hocus Pocus! Building with rolling beats, piercing strings & stabs a plenty from a timeless classic era. You will be hypnotised by the step out nature of the intro as it breaks down in to the vox commanding you to “Make Some Noise…Now!!” Then out of nowhere deep rolling bass drags the listener hook, line & sinker into the track! Deep booming subs combine with a rolling arsonist bass & subtle female vox to keep your senses & internal organs resonating at full throttle whilst the track steps out in a big way!

13. MC B.I.C & Dawn Raid: Mr. Jungle
Is a righteous respectful nod to all the true veteran testosterone-fuelled junglists who roam dance floors across the planet, blending those deep vibes akin to the classic rough & rude jungle sound of the early 90’s.Mr. Jungle comes heavy with a trademark classic pad & string combination, fused with cantankerous breaks that stomp & roll along with the uncompromising “dutty raw” lyrical toasting of MC B.I.C. As the track progresses the hyper intro is met with a roaring reese & bouncing 808 bass which result in a full on soundsystem workout… Heavy!